Goddess Padmavati is the Guardian deity of 23rd Tirthankar Parshwanath. She is believed to be the most worshipped and actively present goddess in Jainism. Devotees have experienced her lifechanging vibrations through jap, tapa and sadhana. Here in this article we’ll discuss about some aspects of Padmavati devi sadhana which can be a lifechanging experience for you.

Devi Padmavati was a snake in her previous birth. In that birth she was burning in the fire of Havana along with her partner. This Havana was organized by Kamatha. Lord Parshvanath saw this in his divine knowledge and rescued this pair of snakes. Snakes were blazed in fire and in their last breath they were made to hear navkar by Parshwanath bhagwan. Parshwanath bhagwan directed them to apologize for all the sins they committed in their lifetime. The apology that they made with pure heart and the vibrations of navkar which they got to feel in their last breaths gave them samadhi and after death they reincarnated as demigods- Dharnendra and Padmavati. Kamath was insulted by people and with time died with immense hatred in his heart. In his next birth Kamath became a demon named Meghmali

One day Parshwanath Bhagwan was meditating in a forest which was governed by Meghmali. Meghmali inspired by the hatred of his past life began to cause trouble in Lord Parshwanath’s sadhana. He flooded the entire forest with immense rain. Gradually water started to rise above Lord Parshwanath’s throat. Dharnendra and Padmavati saw this in their divine knowledge when their sinhasan began to shake. This was a signal for the guardian deities to offer their seva to the tirthankara. Goddess padmavati took form of a huge cobra and gave shelter to Lord Parshwanath under the hood. On the other hand, Dharnendra Dev became a Lotus flower below the feet of Parshwanath bhagwan. With the rise in water level, lotus would also rise and with the hood over his head Lord was protected from heavy rain. With two powerful deities to protect Parshwanath, Meghmali felt defeated and left the place. Devotees believe that Dharnendra and Padmavati help the devotees of Parshvanath Bhagwan and are active guardians of Jinshasan.

There are various forms in which Goddess Padmavati is visualized in ancient scriptures and paintings. Interestingly she is attributed to be in the form of Tridevi. This means that Goddess Padmavati is seen in the different forms of Saraswati, Lakshmi and Kali. Sadhaks worship the form of Padmavati which attunes to their life path and sadhana. One of her statues is also seen to have open third eye. In most of her statues she is seen to be sitted on lotus and has a cobra hood over her head. Lord Parshwanath is seen to be sitted on this cobra hood.

In other statues she is accompanied by various creatures who serve her as her vehicles. Animals and birds like snake, cock, swan and garud are seen to be her vehicles in different paintings. In one interesting illustration she is seen to have a vehicle which has a body of cock and head of a cobra and vice-versa. She is seen to have 4,6 or 24 hands in various descriptions. All the forms of Goddess are pious and will assist you in your journey of liberation.

There are various Mantras of Padmavati Devi which can make you capable of getting her blessings. Every Mantra has a different effect. Some are listed below.

1. Mantras listed below are naam and beej mantras of Padmavati devi. They are immensely potential and makes you worthy of Goddess’ blessings. 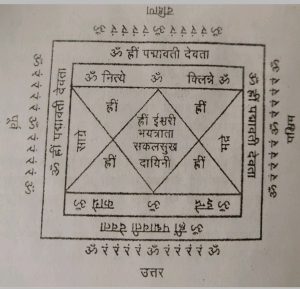 Starting from the Friday of the waxing phase of the moon, if one observes ekasan (eating only once a day) for consecutive 16 Fridays (16 shukravar), one can increase their tapobal and can attain the siddhi of Padmavati devi. One should do this tapa out of devotion to get solution to their life problems. The rules and regulations that one needs to follow during these fasts are listed below.

Hope you liked this sadhana. Do read our other articles and let us know which sadhana do you want to associate yourself with. Let’s make a worthy use of this human life. 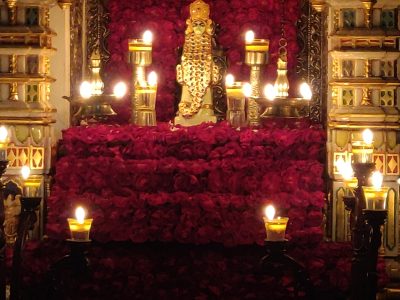 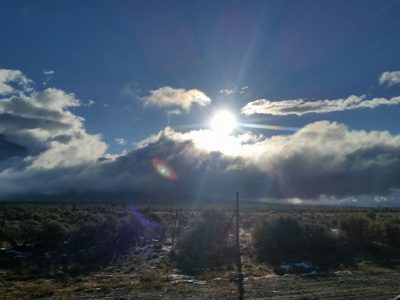